Bitcoin Cash is set for a network protocol upgrade on the 15th of November'20, at approximately 05:30pm IST. The Bitcoin Cash (BCH) blockchain is scheduled to undergo a hard fork at the said date.

It is likely that there is a chain-split between the two main BCH clients, Bitcoin Cash ABC (BCHA) and Bitcoin Cash Node (BCHN).

What is a Hardfork, Simplified: 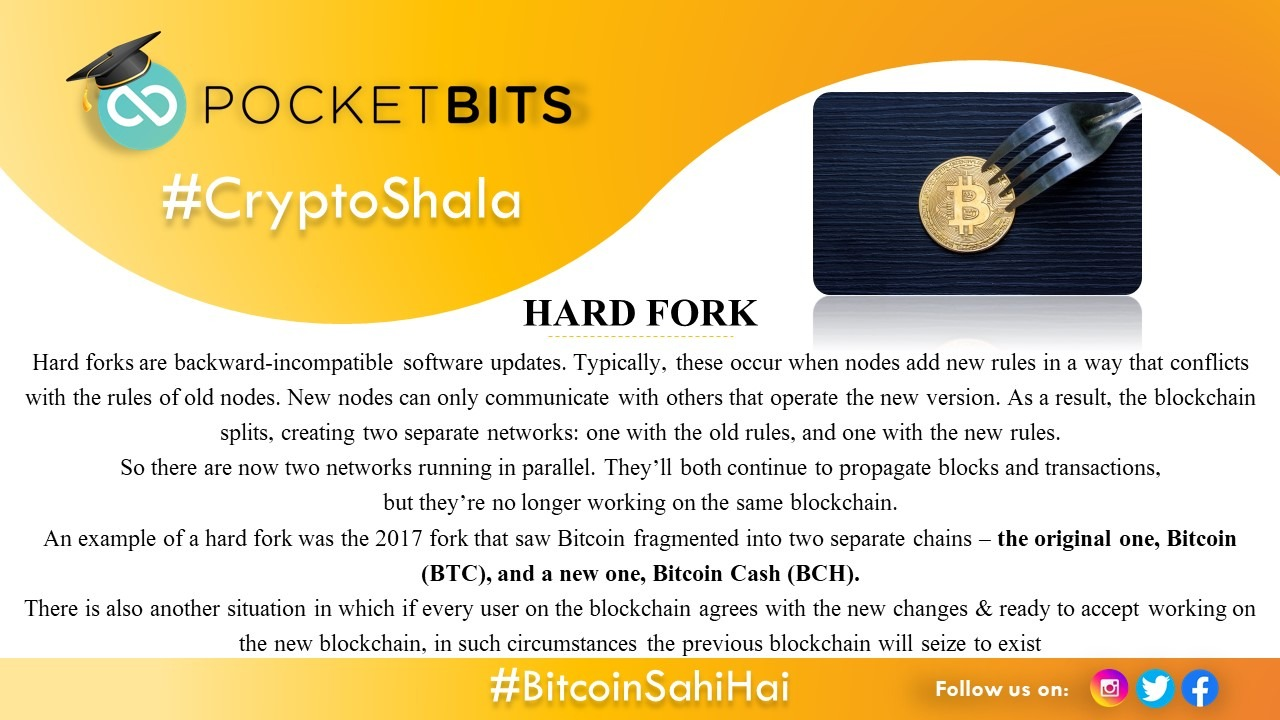 To read more about the basics of crypto; take a look at our education and awareness initiative :
#CryptoShala (Follow us: https://bit.ly/32BG2md)

PocketBits will support the upcoming Hardfork for all the BCH Hodlers. To reduce the trading risks brought about by price volatility and to maintain the safety of user funds during the hard fork PocketBits would do the following:

- BCH Withdrawals would be paused from the Midnight of November 14th'20, until further notice.

BCH  Trading will NOT be affected.

Possible scenarios resulting from the Hardfork:

Possibility 1: The Hardfork could result in two separate chains. We will credit users with BCH from the chain with the most work done only. The minor chain toke distribution would not be supported.

All eligible users would also receive the coin from the minority chain as per the distribution ratio, this would be based on the snapshot of BCH balances.

Possibility 2: No chain split and no new coin would arise from the Hardfork. PocketBits would then re-enable withdrawals as soon as possible.

A further announcement will be made regarding the resuming of the withdrawals, as well as further information about the BCH chain split that may affect the above.

What you need to do as a user?

PocketBits users that HODL BCH do not need to take any action at this time. The PocketBits Team would carry out all the necessary actions.

To read more about the Bitcoin Cash Hard Fork: https://bit.ly/2Uh2ug0

Did you find it helpful? Yes No

Send feedback
Sorry we couldn't be helpful. Help us improve this article with your feedback.